Tax-Free bonds are back. REC has recently announced the launch of Tax-free bonds for 2015. REC Tax Free bonds will be available with a coupon rate of 7.43%. Tax-free bond is good investment option. We had already had a comprehensive discussion about Tax free bonds 2015. Let’s discuss and review REC Tax-free bonds. 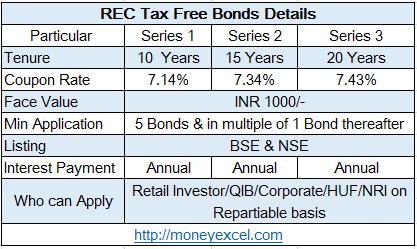 In addition to above you should evaluate this investment option based on your financial goal. If you are risk adverse investor and happy with fixed returns you can think of investing in REC Tax Free bonds.