On 4th March 2015, BSE Sensex had touch all time high level 30,025, but then after we have observed continuous fall in Sensex. From March 2015 to till date we have seen 20% fall in Sensex. Although the market is falling, but some of the good stocks were able to generate up to 300% return. This is mainly due to strong fundamental and visible growth of these stocks.

So, let’s take a look at 10 Good stocks that generated return up to 300% in past one year.

Gayatri Projects is Infrastructure EPC sector company. Gayatri Project is sitting on strong order book worth 3318 Cr. Earning visibility remains strong due to robust order book. This company has a presence across diversified segments. Profit margin at Q4 FY 15 is reduced, however stock could provide a return of 296% since March 2015.

Indo Count is Textile manufacturing company. Indo Count is constantly making a good profit which is the prime reason for the increase in stock price. Indo Count was able to generate 192% return since March 2015.

Sangam India is also from Textile Sector. This company manufactures PV yarn. Apart from this business company is also having own wind power plant. Sangam India was able to generate return up to 186% since March 2015.

Welspun India is next in the list of good stocks. Welspun profit margin is increasing year on year. This year debt level of the company has also gone down. Welspun is making a towel for Wimbledon and that’s how it is now a well known brand. Welspun India was able to generate 156% return since March 2015.

Kwality is food processing company dealing in multiple products. Kwality stock price has doubled in one year. The stock was able to generate 154% return since March 2015.

Dishman Pharma is next in the list of good stocks. It is also pharma sector company. Dishman is specialized in the manufacture of active ingredients for the pharmaceutical industry. Dishman stock was able to generate return up to 119% since March 2015.

Trident is textile company mainly dealing in towel manufacturing. It is one of the largest manufacturer and exporter or textile items. Trident is able to generate 117% return since March 2015. 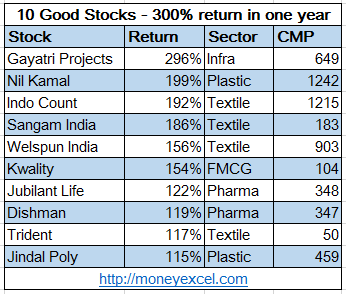 The situation of Stock Market is confusing. Making a new investment in high-value stocks at this stage is not advisable. Although stocks mentioned above were able to generate good return since past one year, it is not necessary that these stock will generate a positive return in the future.

You are requested to carry out due diligence process carefully before making an investment in any stocks mentioned above.